I used to enjoy taking pictures. I still have my first mechanical SLR, a russian made Zenith. Very simple but incredibly robust. All manual and the only resource is a photometer with 3 tiny lights - top red for over-exposed, bottom red for under-exposed, and a middle green. With a fixed lens and manual focus, there isn't much distraction, so I could stick with the basics of photography. I think it was a perfect starting point. My first roll in that camera resulted in a single picture. I wasted all the rest. A few years later, I ran out of battery and learned that I could just guess close enough the speed x apperture combination for each scene.

My first digital camera was a D50. Be able to evaluate later each picture with all the setup recorded into it was a game changer. Before, I had to have a (paper) notebook to write it down. I also had a Cannon for a short period, a D7, which I used a little for work but didn't feel comfortable walking around with it, so I barely used for fun. My collection includes two classic D70 boddies, which was a special mark in the early history of digital SLRs. I'm taking pictures again, using the D70 with a Nikkor 24-120 mm. The wild life around our new house is so cool that it is hard to ignore. This camera now stays in my desk, ready for something happening outside the window, and it oftens pays off.

I'll start to post some pictures again, and for that I'm testing a new setup with an extra rule in my Makefile and keeping the photos outside the site repository. Let's see how it goes. I took this picture from my working desk, at home. Look carefull and you might find a surprise. 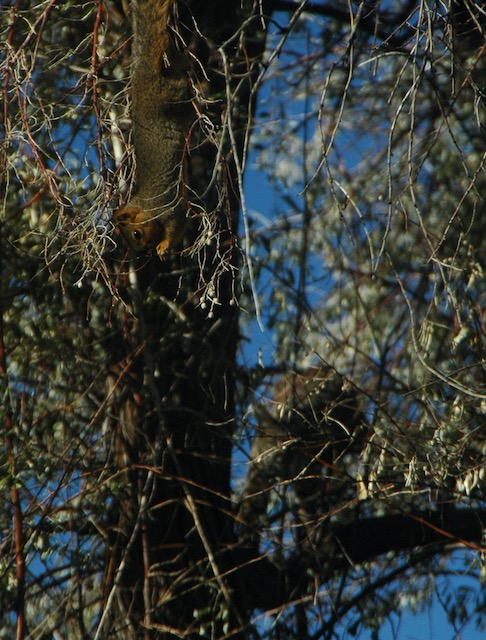